Yes, the Drought Really Is That Bad | Outside Features | Bend | The Source Weekly


Across the West, state leaders are bracing against the long-term impacts of aridification. In late April, Oregon Gov. Kate Brown added four additional counties to the ‘drought emergency’ tally — now, half the state (including Deschutes, Crook and Jefferson Counties) is in a state of emergency. Further south, Metropolitan Water District of Southern California, which gets water to millions of city dwellers, restricted outdoor water use for the first time ever. In Colorado, the U.S. Department of Agriculture designated the entire state a “primary natural disaster area” due to the threat of drought — also considered an “unprecedented” move. The Southwest, as a whole, has been hit hard with dry conditions: Utah and New Mexico both issued separate emergency declarations, one for water scarcity and the other for wildfire. 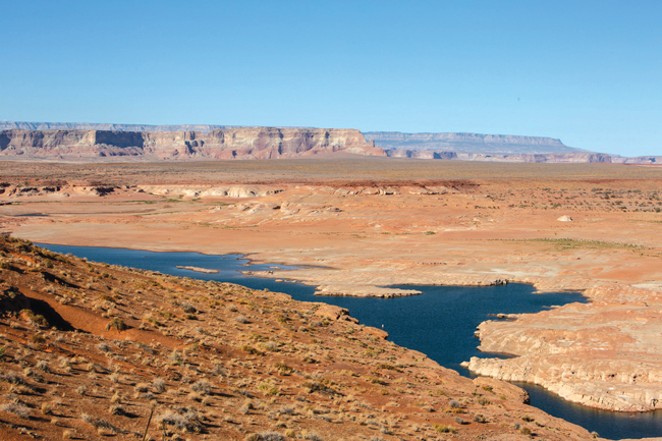 The political designations unlock resources and expand powers for states and counties to navigate the extreme water scarcity, making available, among other things, relief aid for the agriculture industry. Westerners will undoubtedly need it this summer, and — as the drought likely continues — future summers.

Shrinking snowpacks, parched topsoil and depleted reservoirs are symptoms of the West’s worst set of dry years since 800 A.D. There is also a significant likelihood the megadrought continues. A study published in Nature Climate Change in February predicted a 94% chance the drought stretches through 2023; the chances of it persisting through 2030 are 75%, when factoring in continued impacts of a warming climate.

According to the U.S. Drought Monitor, most of the West is in “moderate” to “severe drought.” Certain regions, like eastern and southwestern Oregon, California’s Central Valley, southern Nevada and eastern New Mexico are in “extreme” to “exceptional” drought.

According to Oregon’s Fifth Climate Assessment, the state’s annual average temperature has warmed by about 2.2F per century since 1895. More than a third of the state, on average, has been in drought since the year 2000.

58% of Idaho is experiencing moderate to exceptional drought conditions. The state’s water resource department issued an emergency drought declaration in 34 out of its 44 counties in April.

Glaciers in Washington’s Olympic National Park could be gone by 2070, with permanent impacts on an important source of summer water, according to a new study published in the Journal of Geophysical Research: Earth Surface.

Water sold for $2,000 per acre foot for the first time ever.

In 2021 alone, the ongoing drought cost thousands of jobs and over $1 billion in the San Joaquin Valley; hundreds of wells have gone dry and more are expected to dry up this year.

California’s largest reservoirs, Lake Shasta and Lake Oroville, are at ” are at ‘critically’ low levels.

Lake Powell and Lake Mead, the nation’s largest reservoirs, are at record lows — 24% full and 31% full, respectively. Powell’s stored supplies have dropped to just about 5 million acre-feet, triggering emergency releases to stymie dropping levels. The lake has a capacity of 26 million acre-feet.

Cities, from San Diego to Las Vegas, are adapting with programs like “cash-for-grass” and water recycling, according to reporting from Yale Environment 360.

98% of the Southwest is in drought this week, according to the U.S. Drought Monitor.

According to NASA Earth Observatory, researchers are seeing widespread and severe low-snow and low-runoff conditions across the region. Their modeling indicates snowpack has peaked roughly a month earlier than normal in the Upper Colorado Basin.

'We’ll get him again'