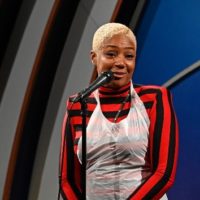 It’s been a week of joy and pain for Tiffany Haddish. On Friday, she was arrested for DUI, and on Tuesday, she was nominated for the NAACP Image Awards Entertainer of the Year. This follows breaking up with her boyfriend Common in December. Now, the Emmy and Grammy winner jokes that she will formally assess potential boyfriends like they were applying for a job.

“I’m gonna go live,” she continues. “I’m gonna interview them in front of everybody, you know, let their girlfriends, ex-girlfriends, whatever, say what they gonna say.”

In other news, Shaquille O’Neal is bringing his All Star Comedy Jam to LA to kick off Super Bowl weekend.

“From delivering numerous sold-out tours to being among the first to give a national stage to current comedy legends such as Mike Epps, DeRay Davis and Kevin Hart, All Star Comedy Jam has been a fixture on the comedy scene, dedicated to elevating the brightest up-and-coming comedic voices,” Shaq said in a statement.
Davis will host the show on Thursday, February 10, at the Microsoft Theater in LA. The event also will feature Bill Bellamy, Mo’Nique, Earthquake and Michael Blackson. The next day, O’Neal will host his annual Shaq’s Fun House Super Bowl Party at the Shrine in LA, featuring a performance by Lil Wayne.

Technology is You | Oregon Tech