The smell of fried garlic hit me as soon I opened the door. It is quite possibly the most intoxicating aroma on earth. Alas, I feared it meant Edna had not waited, and that made me sad. I was there to learn how she makes moqueca, a tomato-based seafood stew that’s ubiquitous along the Brazilian coast. The dish varies by region, and Edna’s hometown of Vitoria is widely considered the birthplace of moqueca. That version of the dish, called moqueca Capixaba, is why I was there. At my mom’s house in Boston, that is. I already missed my golden opportunity to go to Vitoria in real life.

When I reached the kitchen I realized, to my intense alegria, that Edna had been waiting for me all along. The amazing garlic aroma that first hit me was from when she had made the rice – which, like most Brazilian recipes, began with fried garlic. 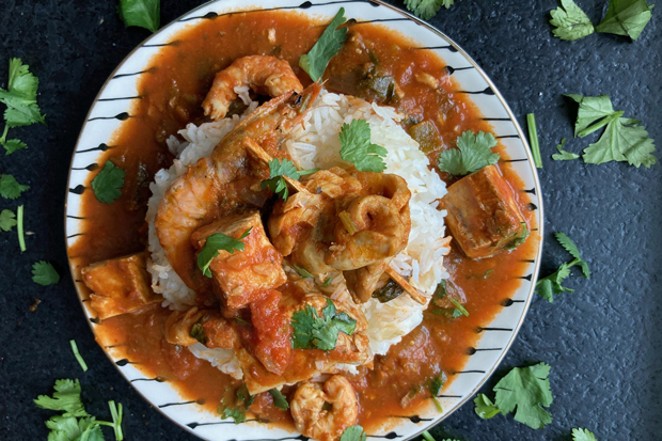 Edna is a Capixaba (cah-pee-shah-bah), which is to say, someone (or something) from the Brazilian state of Espirito Santo, of which Vitoria is the capital. I’ve been on several buses that stopped in Vitoria, heading north from Rio to Salvador da Bahia. I have memories and dejas vous of opening my eyes as the bus slowed down to a stop. I remember misty, forested hills on the left, above the city, and gentle coastline to the right. I never did get off the bus, but always wanted to.

The most world-famous moqueca comes from Bahia, one state to the north of Espirito Santo. Salvador, the capital, is where I was always headed when passing through sleepy Vitoria. Bahia has more people of African descent than any place outside of Africa, and Moqueca Baiana contains coconut milk and dendê, a type of palm oil made from imported West African trees. Dendê is very rich, with a heavy aroma and a strong flavor that isn’t for everyone.

Moqueca Capixaba, on the other hand, takes its cues from a different ancestral homeland. As European as Moqueca Baiana is African, Edna’s moqueca contains olive oil instead of dendé and coconut milk. This version is lighter, and just a few olives and capers away from being an Italian cioppino, and worlds away from the moqueca of the north.

But one thing that all Brazilians can agree on, at least, is the garlic. That is where we started when it was finally time to cook dinner.

Edna had everything chopped and prepped, but for my edification she insisted that I cook it. She turned the heat to medium under a stew pot, and told me to do the Brazilian thing with the garlic. It made me nervous. The last thing I wanted to do was mess up the garlic, either by burning or undercooking it.

Brazilian garlic-frying reflects a level of brinkmanship that you need to get anything done in that land. They take it closer to the edge of burnt than most. Often the garlic is mixed with salt. Sometimes it’s fried in a thin, dented aluminum pan without any oil. As long as the inevitable blackening is thwarted by moisture before it becomes too bitter, the glorious flavor gets captured by the food. In the case of Moqueca Capixaba, the browned garlic gets deglazed by chopped tomatoes and onions, which release their moisture and stops the burning.

I then added a jar of sofrito, a Caribbean seasoning sauce popular throughout the Iberian diaspora. Edna used Goya brand sofrito, with a tomato base and green pepper, onions, culantro and garlic. Culantro is a wide-leafed plant that tastes like extra-strong cilantro. Native to the Caribbean and Latin America, culantro is now cultivated worldwide. In Southeast Asia it has names along the lines of “sawtooth coriander,” and is considered by many to be indispensable to a good bowl of pho.

If you can’t get your hands on sofrito or culantro, don’t sweat it. Sofrito is essentially a condensed version of the other vegetables in the moqueca, so just use more of everything else— that is, extra tomatoes, onions, bell peppers and cilantro—and the right flavors will be there.

The combination of cilantro and bell peppers, along with that almost-burnt garlic, is what creates the distinct flavor of moqueca. It’s like an off-key jazz chord that you play until it sounds right, and then build a song around. The harmonious discord of the moqueca flavor works particularly well with fish, including the swordfish and shrimp that Edna had brought.

I can see why Capixabas consider their moqueca to be the original. Without the distractions of dendê and coconut milk, the flavors of the other ingredients shine through more clearly. Just veggies, fish and olive oil. And fried garlic, of course.

For the recipe, and the rest of the story, please follow the link: arilevaux.com/the-real-moqueca/

Violent Crime Suddenly Not a Concern,…