Shop Local: Holm Made in Central Oregon | The Source Weekly


Part of this week’s Shop Local feature, a story on how local products get made.

Holm Made Toffee got its start selling its homemade toffee at farmers markets in Central Oregon. Now, it ships thousands of pounds of toffee to both national and local vendors. Despite the company’s growth, the toffee is prepared largely in the same way it was when the recipe was first created decades ago.

“The only one thing that we have mechanized, since my mother-in-law started making this almost 40 years ago, is the kettle with the steering arm,” said Randi Holm, owner and “chief toffee officer” at Holm Made Toffee.

That kettle heats up butter and sugar between 300-400 degrees that becomes the crunchy sweet toffee base that can then be topped to create any of Holm Made Toffee’s 12 flavors. Holm said the kettle seemed too big when they first bought it, but now the machine is on from 8 am to 6 pm nearly every day. The toffee is made without any corn syrup, preservatives, soy or gluten. The result is a confectioner’s dream, and the Original Hazelnut Toffee won the bronze medal in the toffee category of the 2020 International Chocolate Salon.

“We’re never going to use corn syrup or cheap out and put fillers in there. I’d probably actually rather cease production rather than change the recipe that we’ve been using for so many decades,” Holm said. “I think that’s what really differentiates us is our quality ingredients sourced as locally as possible.”

Holm always uses dark chocolate and hazelnuts as a base for nearly all of its toffees. Then the toffee is topped with things like marionberries, cardamom and vanilla, gingerbread and more to make distinct flavors. 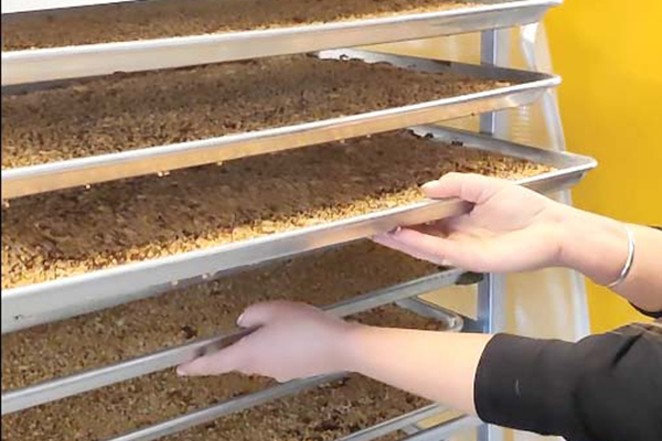 One might think the candy business is sweet, but Holm said she’s had problems lately with supply chains and hiring that’ve disrupted several different industries. Butter is costing her about 70% more, chocolate was up over 40% last year and her orders of packaging have been delayed due to pulp shortages.

“We purchase as directly from the sources we can purchase as locally as we can, and try to cut out the middleman whenever possible and it’s still just super costly and unsustainable,” Holm said. “My big ask this year is to not just shop small during shop small Saturday or Black Friday week, just to make it more of a habit, or a lot of us won’t be around in the years to come.”

Holm Made Toffee is stocked in dozens of Central Oregon stores and in specialty shops across the country. The treat has even made it all the way to North Pole, Alaska — the town, not the northernmost point of the planet.