The Bend City Council authorized the purchase of the Rainbow Motel at its regular meeting Jan. 19, saying the property has potential as a temporary shelter for people experiencing homelessness as well as longer-term goals. It’s the second motel the City is converting into a shelter after receiving $2.97 million in state grant funding to convert the Bend Value Inn in July.

The City Council is aiming to add 500 new shelter beds by 2023 to augment the 280 beds currently available year-round. General funds paid for the Rainbow Motel so it could eventually be used as something other than transitional housing. 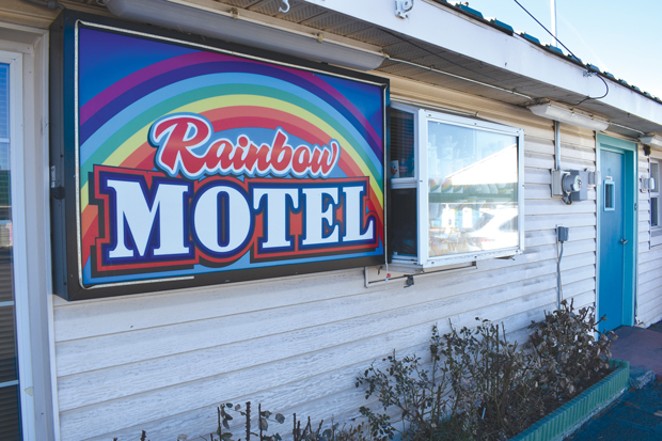 “Buying the motel is an opportunistic public investment that can meet a variety of short-term and long-term community needs including but not limited to an immediate need for transitional shelter, as well as future possible site for city hall, affordable housing, a civic plaza or other public uses,” City Councilor Megan Perkins said in an update on housing strategies.

The motel will be operated as a low-barrier shelter by a nonprofit selected through a competitive process. The motel is expected to open its doors in late spring or early summer, will have 40 to 60 shelter beds and will be used for two to three years before it’s transitioned to a different use.

The motel cost $4.55 million and sits on just over an acre of land in Bend’s Central District on Franklin Avenue. It’s just blocks away from the Second Street emergency shelter operated by Shepherd’s House—Bend’s low-barrier overnight shelter with 90 beds, and near a growing encampment on Second Street.

“It will be a low-barrier shelter with a 28-room capacity. A contract with NeighborImpact is being developed to operate it. The earliest possible use of this facility would be this winter, with renovations occurring in Summer 2022,” Councilor Perkins said of the Bend Value Inn space.

The City had an open house planned for Jan. 25 to share plans for the remodel and a timeline to complete the improvements. Converting motels are just part of the Council’s goal to increase shelter capacity. At its regular meeting Jan 19, it reported that they’ve met or are on track to achieve 86% of goals. An online dashboard tracking each goals’ progress show one goal is completed, three need attention, 11 haven’t been started and 68 are on target.

Bend’s Recovery Strategy and Impact Officer Carolyn Eagan said the City doubled the number of available shelter beds in town over the last 18 months. The annual Point in Time Count for 2021 estimated that there were about 1,100 houseless people in Bend, a number that’s consistently ticked up 10-12% each year over the past several years.