May The Divorce Be With You, The Flirt Locker | Advice & Fun | Bend | The Source Weekly


May The Divorce Be With You

My apartment building has paper-thin walls, and I overhear a lot of what goes on between the couple next door. The man makes constant belittling remarks — calling his wife “ugly” and “stupid” and saying she’d cheat on him but no other man would want her. What leads a man to talk to his wife like this? 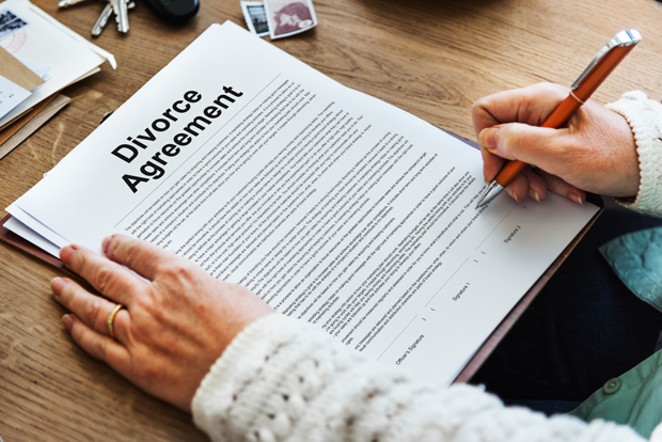 Among the tips strangely absent on those “Ways to Keep Your Marriage Alive” lists is “If you can’t say something nice, scream it at your wife.”

However, evolutionary psychologist Todd Shackelford finds that cruel putdowns are actually a “mate retention” tactic — of certain men: seriously low scorers in the What Women Want department. Women prize men who are kind, intelligent, emotionally intelligent, generous, and hardworking “providers” (“high mate value” men). These men have the emotional and financial chops to take the mate-retention high road: showing the wife she’s loved, romancing her with trips and gifts, listening to her, making her laugh, and always having her back.

In contrast, a typical lumpen loser “low mate value” man is lazy, selfish, dull, and unattractive, and has a low-paying, dead-end job. He lacks the psychology and resources to “provide benefits” (make his wife feel too happy and loved to ditch him). So, he’s prone to resort to “cost-inflicting mate-retention behaviors” — verbal abuse or violence or both — with the subconscious goal of making her too emotionally broken to leave.

When the abuse is verbal, evolutionary psychologist Aaron Goetz finds it plays out in four ways: cutting remarks about a woman’s looks, her intelligence, and her value as a partner and a person, and (often baseless) accusations that she’s cheating. The message — because men evolved to prize beauty, intelligence, kindness, and fidelity in their mates: “No other man would want you.”

There is a pinprick of light in the gloom. Relationships researcher Jason Whiting reports that most women in abusive partnerships eventually leave — often because they reach “a breaking point when the fear and pain” become “overwhelming.” Ideally, she’ll join that sisterhood — sooner rather than later. Sadly, right now, probably all you can do — without possibly endangering yourself or her — is hope for a brighter future for her: “Hold fast to your dreams, honey! — unlikely as it is that a random hit man will kidnap your husband and dissolve him in lye in a motel bathtub.”

I’m a woman in my 20s. I’m sick of guys who try to take my being nice as something more, turning that into an opening to press their own agenda. I’m angry at having to act cold and guarded to keep men from hitting on me (so I don’t have to lash out and tell them how rude they are). Being clear about my boundaries gets me called the “B word,” but it stops them from coming at me till I have to put my foot down.

“I feel ya,” said the gazelle. In a perfect world, lions would carefully inquire about a gazelle’s boundaries and politely skirt them rather than rudely “pressing their own agenda”: chasing her down and turning her into the brunch special.

Here in the less-than-perfect world, people, like lions, “press their own agenda,” which is why medieval castles were surrounded by moats instead of welcome mats. Annoying as it must be to kindly but firmly inform a man his interest is unwanted, men don’t — as you put it — “try to” interpret a woman “being nice as something more”; they’re psychologically prone to do it.

Research by evolutionary psychologist Martie Haselton suggests we evolved to make protective errors in judgment — either underperceiving or overperceiving threats or opportunities, depending on which error would be the “least costly” to our mating and survival interests. For Joe Loincloth, the possible downside from overperceiving interest — a woman jeering at him in front of his cave bros — would’ve been way less costly than missing an opportunity to go behind a bush with her and maybe pass his genes on to future generations.

Since anger changes nothing but your blood pressure, you might consider a rethink. If a guy isn’t doing anything rude or criminal (grabbing your boob or saying he’s gonna do you in the elevator), why not respond as you would to anything else you don’t want: with some version of “No, thank you”?

Treating a guy with kindness and dignity — being politely firm — costs you nothing and gains you a good deal: keeping the interaction from going ugly. You might also take a historical view: Consider how possibly unwanted remarks — “You’re really pretty. Wanna have coffee?” — have shaped your entire existence. “I think, therefore I am,” is a lovely sentiment, but the reality is more like “My dad had enough game to get my mom into bed.”

Violent Crime Suddenly Not a Concern,…