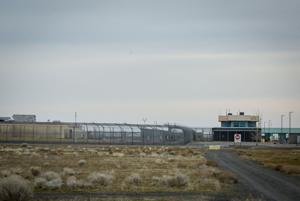 Powder River Correctional Facility in Baker County is in a heightened state of alert and testing according to the Oregon Department of Corrections COVID-19 tracker, as cases rose amongst the staff and prisoner population at the end of January. Seven out of the 15 prisons in Oregon as of Tuesday, Feb. 8, had units under quarantine.

Overall, case numbers had increased dramatically through January, peaking at 286 active cases for Two Rivers on Jan. 20. In December, those numbers were in the single digits.

Those case numbers fell throughout the week. As of Feb. 8, Two Rivers had just one active case of COVID-19.

As a percentage of total cases during the entire pandemic against the number of beds at each facility, Two Rivers ranked the highest by a wide margin. The case-to-bed rate was at 68%, while the average across all prisons in Oregon was 33.3%.

Corrections officials wouldn’t say whether or not the COVID-19 cases that spurred a large spike at Two Rivers was due to a staff member, but case numbers and dates shared with EO Media Group show staff at Two Rivers had tested positive on Dec. 29, just 10 days before members of the prison population showed a spike in positive tests.

“There is no way of knowing exactly how each positive case originates or is spread,” said Betty Bernt, communications manager for DOC. “When an individual comes into our intake unit, our current process is to test all adults in custody.”

“There’s only one way for the virus to get in, and that’s through the staff,” he said. “It’s abundantly clear that mask wearing has been scant in particular with correctional officers. They haven’t been enforcing the mask wearing policy, they just let it slide. They’re more afraid of losing staff than they are of killing people, in my mind.”

Chavez noted because intake goes through Coffee Creek Correctional Facility — DOC’s intake facility in Wilsonville where adults in custody are tested, isolated and quarantined before being transferred to other parts of the state — the possibility of an inmate bringing the virus into a different prison is remote.

The Oregon Justice Resource Center is involved in a class action lawsuit against the Department of Corrections due to conditions at the prisons regarding COVID-19 safety. That lawsuit is expected to go before a judge on Feb. 14 for certification.

Chavez said the lawsuit, filed in April 2020, asked only the bare minimum from Corrections regarding safety procedures in combating the spread of COVID-19. Those measures included mandatory masking for correctional officers and implementing social distancing requirements.

Those requirements, according to the lawsuit, were widely ignored.

In the lawsuit, one plaintiff described an interaction with staff that conveyed DOC’s reactionary nature to outbreaks: “I was complaining that it was hypocritical we had to wear masks but officers didn’t; that officer said to me ‘(expletive) it, we’ll deal with it when it comes.’”

The lawsuit also described practices where correctional officers would move from a quarantined unit to an uninfected unit without a mask, likely due to overtime and staffing shortages at the facilities.

“I think the (COVID-19) situation shakes the entire foundation,” Chavez said, “What we were asking for only sounds extraordinary if we weren’t in extraordinary times, and so we needed something grander. And that didn’t happen. A lot of people got hurt.”

Two Rivers has been especially problematic, according to prison attorney Tara Herivel, who has litigated hundreds of cases against the Department of Corrections. Herivel said approximately 80% of her cases are against Two Rivers. According to Herivel, despite the litigation and sea of lawsuits, Two Rivers in particular is “not afraid enough to change.”

“The conversation I have a lot with my clients and people I work with is why?” Harivel said. “Why is it so horrible? Why don’t they learn? They’ve been sued so many times, and I just don’t think they’ve been sued enough. I think they don’t have real consequences, and they can brush away these individual suits like the kinds I do pretty easily. They just don’t follow court orders.”

Herivel said in addition to filing a majority of her prison cases against Two Rivers, she has had contempt of court motions against the prison’s medical department for failing to follow the court’s orders, leading to the release of an adult in custody 11 years before their sentence expired.

‘We learned the hard way’

Positive cases in staff members at Eastern Oregon prisons preceded every spike of COVID-19 among inmates in January.

The correctional facilities handle medical cases through their own health care settings, according to Bernt.

In Ontario, Dr. Garth Gullick, the chief medical officer for the Snake River Correctional Institution, testified that a fever was not a symptom of COVID-19, that COVID-19 testing was “harmful” and said it “can be the enemy,” according to reporting from the Malheur Enterprise. The reporting also indicated Dr. Warren Roberts, Correction’s top medical advisor, had been ordered to stop performing surgeries and had a history of malpractice.

“Cases are handled internally to the extent possible through our Health Services units and infirmaries,” Bernt said. “If an individual’s symptoms surpass our ability to care for them, they are transferred to a hospital for care.”

A spokesperson for Two Rivers declined to comment on the COVID-19 situation at the facility, citing a need to go through the Oregon Department of Corrections for a unified response. Two Rivers officials did not respond to an emailed list of detailed questions about the outbreak at the facility.

EOCI saw a milder outbreak than it had at the start of the pandemic, according to Ron Miles, supervising executive assistant.

“In addition to masking, we’ve done our best ability to maintain social distance or maintain 6 feet of distance between everybody, but the challenge with that is putting 1,700 people into a 15.2 acre location,” he said. “So social distancing is not going to be easy, that’s a just fact of prison life.”

Miles credited previous experience with the pandemic as a key factor for controlling the recent outbreak.

“Part of it is vaccinations, part of its precautions we’ve taken since the very beginning and some of it is experience with the COVID pandemic,” Miles said. “No institution, no prison anywhere in the world is equipped for a pandemic, so when one hits, you have to learn what you don’t know. We went through that process and learned what we didn’t know and the second time around we were better prepared for that, and vaccinations played a big role in that.”

As of Feb. 8, EOCI had zero active COVID-19 cases, according to the DOC COVID-19 website.

“We learned the hard way, but we did learn,” Miles said.

Powder River, Baker City, saw an outbreak of 21 cases by Jan. 29, which fell to eight cases on Feb. 8. Herivel said Powder River was one of the best prisons in Eastern Oregon when it came to COVID-19 safety.

On the other hand, Two Rivers had nearly 15% of its adult population test positive for COVID-19 on Jan. 23.

Miles said EOCI offers vaccines to the adult in custody population, as well as offering vaccine booster clinics from time to time for prisoners to keep up to date with the COVID-19 vaccines.

Previous reporting by the East Oregonian through numerous interviews with lawyers representing clients at Two Rivers, as well as inmates themselves, had shown a lax regard for COVID-19 safety at Two Rivers. Inmates cited improper mask wearing by staff members and mixing of COVID-19 positive inmates with the general population for work.

According to previous reporting by Oregon Public Broadcasting, Two Rivers saw a spike in infections during December 2020 after two staff members tested positive, and the facility transferred 10 positive individuals from Deer Ridge Correctional Institution, Madras. The same day the facility transferred adults in custody from Deer Ridge, it began seeing a spike in cases; with 85 cases on Dec. 21, 2020.

As of Feb. 8, 10 employees at the Two Rivers had not yet started either their vaccination or exemption status. Powder River had just two, and EOCI had six. Out of the 5,306 DOC employees reported to have been under the vaccination compliance executive order in 2021, nearly 20% had filed and received a medical or religious exemption, according to DOC data from October 2021.

The number of in-custody deaths across the state also appears to be increasing, with four reported deaths within a five day period between Jan. 27 and Jan. 31, though none of those deaths cited COVID-19 as the cause of death. Since the start of the pandemic, 45 adults in custody have died after testing positive for COVID-19, according to DOC data, while 17 of those deaths are from adults in custody at Two Rivers, the highest out of any of the other prisons in Oregon, despite being the third largest prison in Oregon. EOCI, which has a similar population size of adults in custody, had four deaths throughout the pandemic, while Powder River had none.

The Department of Corrections keeps a spreadsheet of positive tests for COVID-19 on its website, but that database has not been updated since Nov. 12, 2021. Corrections officials said staffing issues and the tediousness of entering the data by hand had made the task too resource intensive. Daily COVID-19 statistics and active cases are on the Oregon Department of Corrections website through its COVID-19 tracker at www.oregon.gov/doc/covid19/Pages/covid19-tracking.aspx.

How to watch Jennifer Lopez in ‘Marry Me’: Premiere date, cast, trailer, stream for free

The Top Twenty Five – The…