On Jan. 21 the American Bar Association released a two-year study of Oregon’s public defense system and attorney workloads, affirming what public defenders have known for years: They are under-resourced, overwhelmed and have unsustainable caseloads.

The ABA concluded that Oregon only has 31% of the full-time attorneys needed to handle its adult and juvenile caseloads. Additionally, they found the contracting system, where counties hire nonprofit firms, consortiums and individual lawyers, byzantine and prone to data errors. 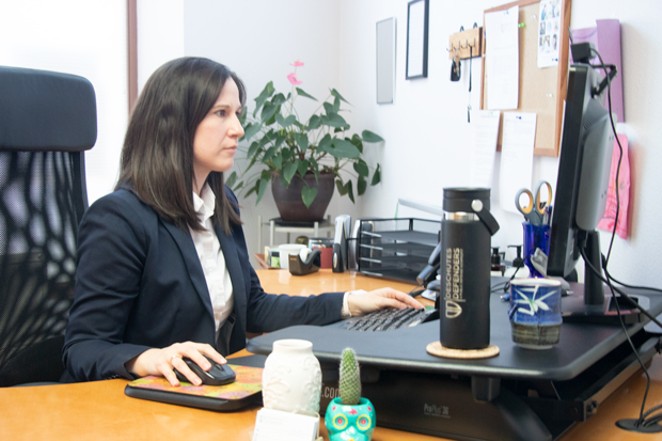 Deschutes Defenders, a nonprofit legal firm that represents about two-thirds of people in need of a public defender in Deschutes County, hasn’t experienced quite the type of crunch as public defenders in Multnomah, Lane and Washington counties, where some defendants have gone without representation while jailed, but if nothing changes it could be headed in that direction.

“Historically, a younger or less experienced attorney that is doing mostly misdemeanors could have a caseload up to 130 misdemeanors. And then a major felony could have as many as 80 cases,” said Joel Wirtz, executive director of Deschutes Defenders. “Those numbers that I described are based on what the contracting model has been. So, the underfunding of public defense where they think it’s reasonable for someone to have that many cases at any one time.”

The contracting model is fixed per lawyer. Prior to 2021 it was fixed by type of case, which critics said disincentivized lawyers to spend time on a case. A 2019 study by the Sixth Amendment Center called Oregon’s system unconstitutional, and recommended the state pay lawyers an hourly rate that accounts for overhead and a reasonable fee, or hire adequately compensated and resourced government-employed public defenders.

“Their compensation system right now incents them to do as little work as possible on a case,” said Stephen Hanlon, a lawyer who conducted research for the ABA report, while stressing he’s not speaking for the ABA. “That’s a conflict of interest and it is per se unethical.”

The result is a public defense system that struggles to represent clients, despite the best efforts and intentions of the public defenders themselves. Public defenders are among the lowest-paid attorneys, and despite this often work long hours under stressful circumstances. High caseloads lead to prioritizing cases that could lead to worse outcomes for their other clients.

“We have 16 attorneys; if we had essentially triple that number, the quality of our work would across the board be better,” Wirtz said. “What we’re doing is just triage. When you’re successfully defending one person, the vast majority of your other clients are not getting attention, they’re not getting calls back, you’re not doing investigation, everything stops when they’re doing a major trial or getting prepared for a major trial.”

Even less extreme changes could seriously benefit public defenders’ work. At the start of the pandemic there was a brief period where fewer cases were being filed. In the lull, investigation requests actually went up, and lawyers spent more time on the cases they had.

“We had this brief few months in, March, April and May of 2020, where we could really focus on our cases,” Wirtz said. “We weren’t getting that many cases, trials weren’t going initially. The question is, can I empirically say that we got better results? I am certain that we got faster results, and that’s one of the problems with the current system is things are so slow, because they’re so bogged down with volume.”

Without trials, a significant amount of time can be saved. It’s not uncommon for an attorney approaching a trial to work more hours, which can lead to burnout over time.

“If I’m spending my day from 8am to 5pm, moving from court appearance, to phone appointment, to jail to court appearance, I don’t have time to say, ‘Hey, I need to prep this trial,'” said Katherine Griffith, an attorney at Deschutes Defenders. “The reality of prepping for a trial is I need to sit down for hours with the materials. So, what I do is I come back after my kids go to bed, and I work from 8pm to midnight, getting ready for these trials. Other lawyers prefer to come in for a full day on the weekends.”

The long hours, relatively low pay and emotional commitment can catch up to public defenders. Half of Deschutes Defenders’ attorneys left in 2021, and attracting new talent to Bend, with its high cost of living, has been a struggle.

“We usually can get a young attorney, but once they realize that money is better someplace else, the caseloads are better, it becomes hard no matter how motivated they are and see that the need is there, they just are going to get worn down,” Wirtz said.

Another impediment to finding new people: the misconceptions about public defenders, who often have a poor reputation in the industry.

Staffing issues can plague prosecutor’s offices, too. Deschutes District Attorney John Hummel said that attorneys in his office can work on up to 50 high felonies concurrently, or about 120 misdemeanors. In 2019 Hummel commissioned a study on staffing in his office and was eventually able to convince county commissioners he needed more staff.

“When they saw that study they realized that there is a problem in the DA’s office so they gave us significantly more staff,” Hummel said. “Not as many staff as recommended by the consultants, I still feel we’re still a little understaffed, but it was a significant improvement.”

Public defenders represented people only in felony cases before 1963, but would gain responsibilities for juvenile cases and misdemeanors with jail time attached to it over the following decade. With all these responsibilities stacking up, lawyers gathered at the Hotel Del Coronado in San Diego in 1973 to mull over questions about public defense, according to attorney Hanlon.

The number of cases public defenders could reasonably handle wasn’t on the agenda, but it was a topic of discussion afterward, when lawyers met in the hotel’s lounge. They decided that public defenders could, on a yearly basis, handle 150 felonies, or 400 misdemeanors, or 200 juvenile cases. That decision has been codified into the ABA standards, though it was only based on a group of attorney’s hunches.

“No data. No nothing. Just bullshit,” Hanlon said. “Now think about 150 felonies undifferentiated. That would cover stealing over $500 and murder. I mean, that decision must have been after the third drink. It was nonsense on its face.”

In Oregon, public defenders only represent people who’ve proven they don’t have the means to afford a private attorney, which is roughly four out of five of all criminal cases in the United States, according to The New York Times. The attorneys who do choose to go into public defense often do so out of a sense of social justice.

“I did grow up in circumstances that were very difficult, and probably more like my clients than my coworkers,” Griffith, the public defender, said. “I had access when I was growing up to really great opportunities at school. I had really supportive siblings, and those things changed my life. So it’s really important to me to acknowledge that but for those opportunities, maybe I would be the person sitting on the other side of the desk.”

Those most in need are often Black and Latino, who Hanlon said were deliberately targeted through drug war policies starting with President Richard Nixon. Fifty years later the jagged foundations of the criminal justice system are still present.

“It’s kind of a toxic mix of race, class and real danger,” Hanlon, a contributor to the ABA study, said. “And the problem is we’ve lumped millions of people as dangerous, and they just aren’t. They do things because of poverty that was largely caused by deliberate government policy. And not just the government, the real estate industry, the powers that be in every town, this has been done all over America.”

Hanlon’s work on the public defender system is only part of his goal, which is to radically restructure America’s criminal courts away from mass incarceration. A Brennan Center Report estimated that 38% of the prison population could be released immediately with no public safety impact. He considers this his profession’s biggest shame.

“I’m pretty critical on my profession, but I’m proud to be a lawyer. My father was a lawyer, and I’ve been doing it for 55 years, but I am ashamed of what my profession has done becoming the principal facilitator of mass incarceration,” he said. “Before I check out, I’d like to end or at least make a meaningful contribution toward the ending of that, and get my profession to stand and be the professionals that we were trained to be.”

To achieve this he’s conducted workload studies in seven states, and plans to bring a 17-state study forward in August. Oregon’s understaffed public defender situation isn’t unique—in fact, it’s typical. Of the studies released so far, most states were running at about 70% deficient, with the exception of Louisiana, which is closer to 80% deficient. With the information widely available it informs legislators of the severity of the problem, and also gives an avenue for challenges in court.

“We are primed for having a lawsuit filed against the state for not adequately providing legal services for those who have the right to them,” Senate Judiciary Committee Chair Sen. Floyd Prozanski, D-Eugene, told OPB. “And what that means is that you could see verdicts overturned because of inadequate defense. You could also see where the court could in fact impose conditions on the state to come in compliance. Either way, it’s not good. And to be very frank, it is something that we, the Legislature, have an obligation to address.”

If the legislature doesn’t address Oregon’s deficient public defense system, there’s precedent in other states of courts acknowledging and addressing the problem.

“The legislature needs to step up, but if the legislature doesn’t step up, then the court has the primary responsibility,” Hanlon said. “What Missouri said, and what Oregon would probably wind up saying, if the legislature won’t come forward, is, well, you’re gonna put those resources on those murderers and rapes, let’s make sure we got those really high-risk situations taken care of, but the rest of it’s got to go away, because we can’t put a lawyer there for that right now.”

Ballot measure to change Portland government tops $400K in donations, mostly from a…

These regions have the most untapped real estate potential | Entertainment News

Dining with a view fun way to wrap up…

Stanford to be without star corner Kyu…